Search for things like “Repair Damage“, “Add Legs to Furniture“, or “Remove Paint“.

This is how you can add raised embossing to any of your painted pieces, and make it look like it’s part of the wood! It’s great for those drawers or parts of old furniture that are damaged too! Cover up those damaged areas with the easiest way to create beautiful texture to painted furniture.

We’ve got another Country Chic Paint makeover for you!! If you haven’t tried Country Chic Paint, you’re missing out! It’s my favorite pre-mixed chalk style paint on the market! It’s easy to work with, sticks so well, sprays amazingly, distresses like a dream, and I just love their special finish products!

Aren’t these cute little antique dressers just the cutest? It’s definitely a petite little thing and will be adorable in a little girls room or even an entry way OR in that small space that needs a little somethin’. Update: SOLD

For This Makeover I Used

Get 10% off your first order with this Country Chic Paint coupon!

The Prep and Repairs

These cute old dressers have a ton of character because of how old they are. Some of these were built over 100 years ago, when power tools weren’t a thing, so everything was done by hand, which creates so much character. Some things need fixin’ to make it more sturdy and strong, and some things should be left alone to keep the piece true to it’s original beauty.

So, when we brought it home, one corner of the top was broken off. Luckily the corner piece was still attached with a nail, so we took off the top, glued the corner piece back to the main piece, and reattached the top to the dresser. Then we reinforced the sides and even filled in a large gap on one side of the dresser with Bondo. (Learn more about repairing furniture with Bondo HERE!) 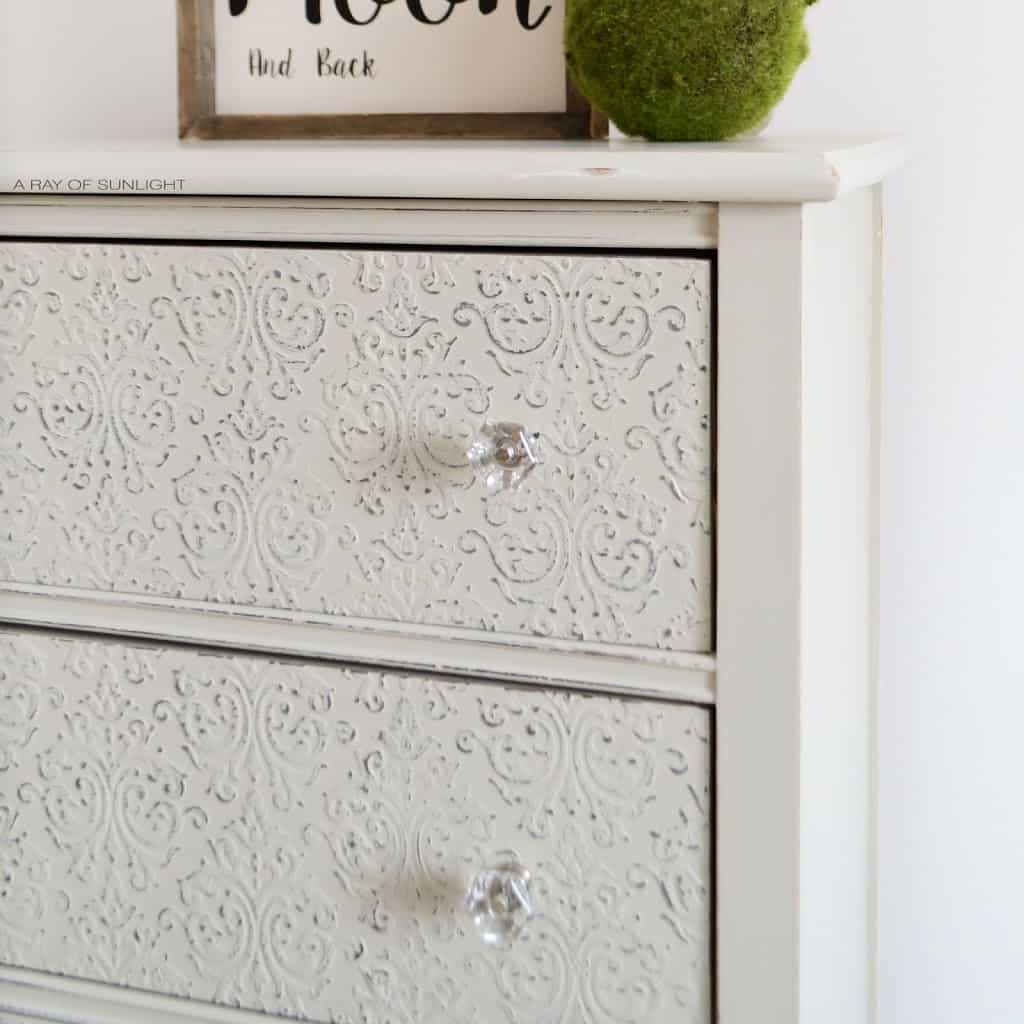 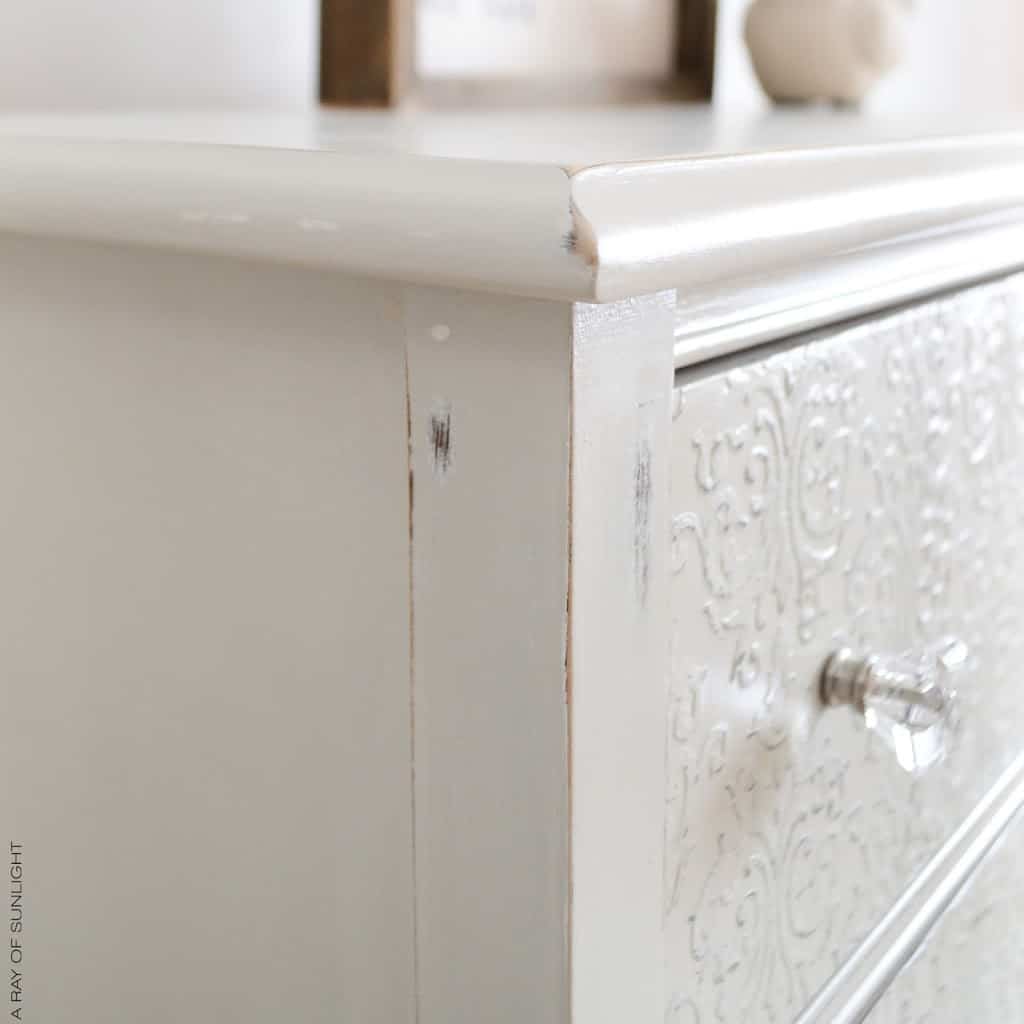 Then I prepped it like I do every single piece. It’s really so important to make sure the furniture is ready for paint.

Each drawer received royal treatment with some fresh new texture! This step is soo easy but totally creates so much detail and extra fun! I wrote more about it here, on these end tables I did. But the basic process is this. I mixed equal parts of Country Chic Paint’s Texture Powder with Dark Roast. It should be about the consistency of peanut butter. Then I grabbed the stencil and taped it smack dab in the center. I drug the flat edged tool, with a little bit of texture paste on the edge, across the stencil to fill in the stencil. I made sure to keep it to a thin layer of texture everywhere. Then I removed the stencil, worked on the next drawer until I had done all the drawers. THEN I went back to the first drawer, lined the stencil up where it should be, and continued the pattern.

Here is another tutorial explaining the process.

Also, it’s always best to wash off the stencil right after use so the texture and paint doesn’t dry onto it.

I let the texture on the drawers dry overnight and then moved on. 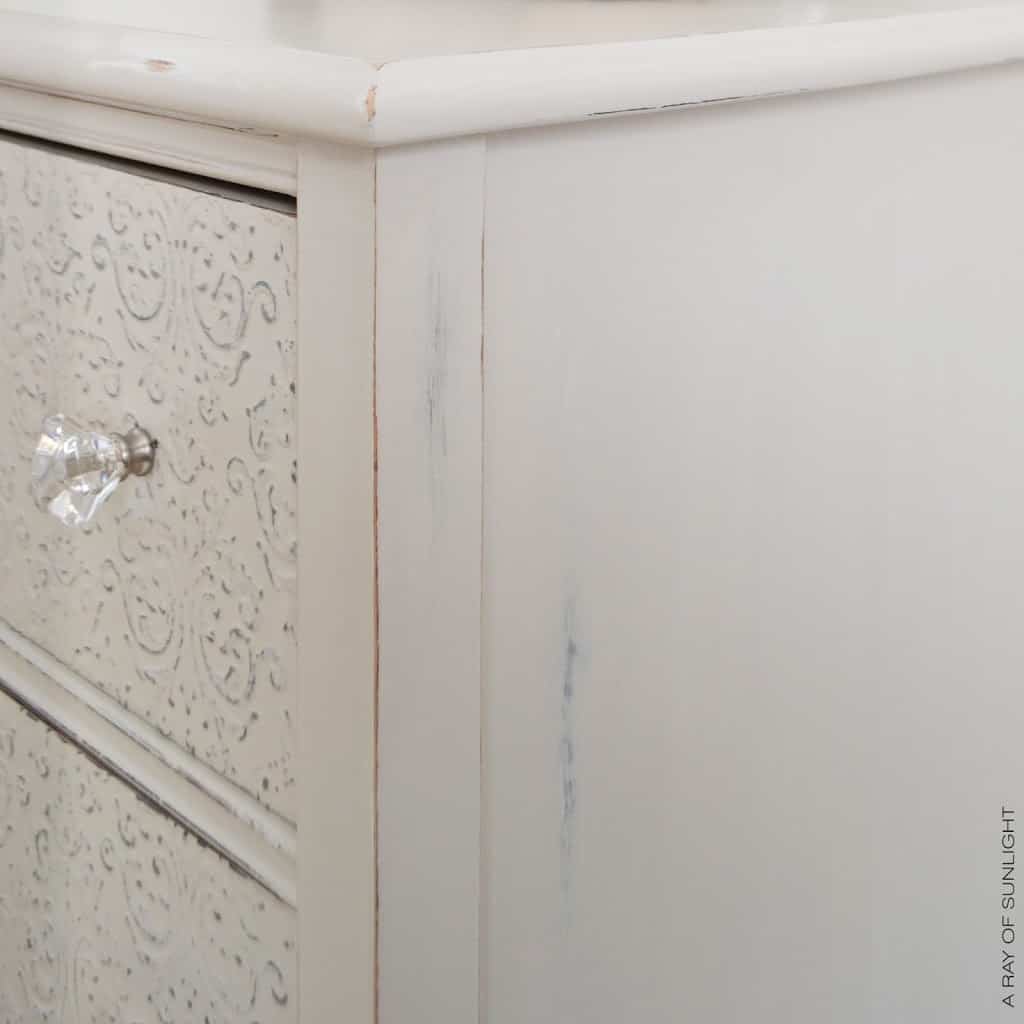 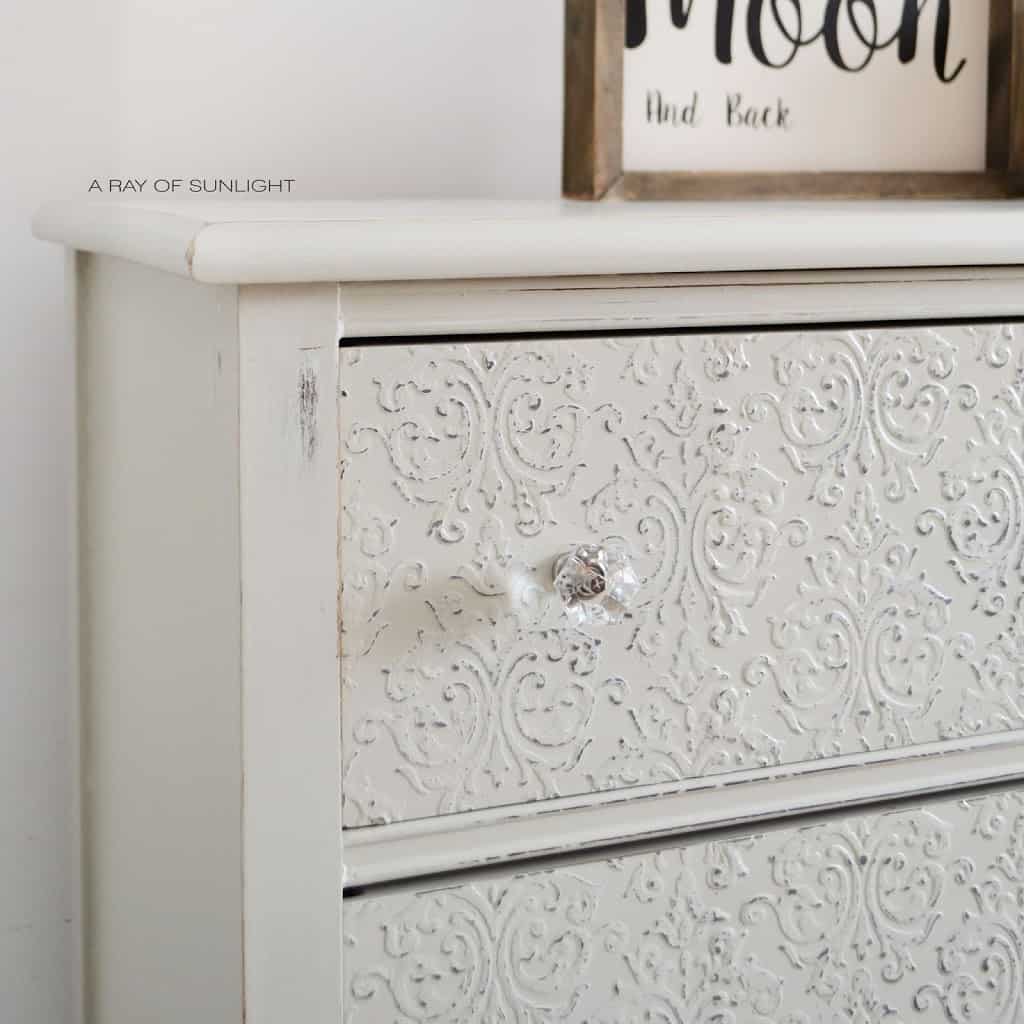 SIDENOTE: Bleed through is a beast, so here’s how I prevent it!

Because I was using a light color, and because I had sanded down to the bare wood in some places, I went over everything with two coats of General Finishes Stain Blocking Primer. This stuff is AMAZING! If you’re sick of using shellac, or a shellac based primer, only to get bleed through in some areas, you have to try the Stain Blocking Primer! Since I have started using it, I haven’t had any bleed through!! And if you have dealt with much bleed through, you know it is a major pain! Plus it doesn’t smell as strong as shellac!

Let me tell ya, I have had my fair share of projects that I had completely finished, only to find that it is bleeding! Sometimes the red, orange or brown spots don’t come through until you’ve sealed up the paint and are completely done. It sometimes doesn’t even show until a day or two AFTER I’m done. So I’ve learned to protect myself against it, and I almost always prime my piece before hand! Even if I use a dark color. It still bleeds through sometimes! Not worth it!

I will say though, if I’m going to finish a piece in a dark color, I will usually stick to the shellac. Just because it is clear when it dries. Then when I distress there isn’t any white showing between the wood and the finish. 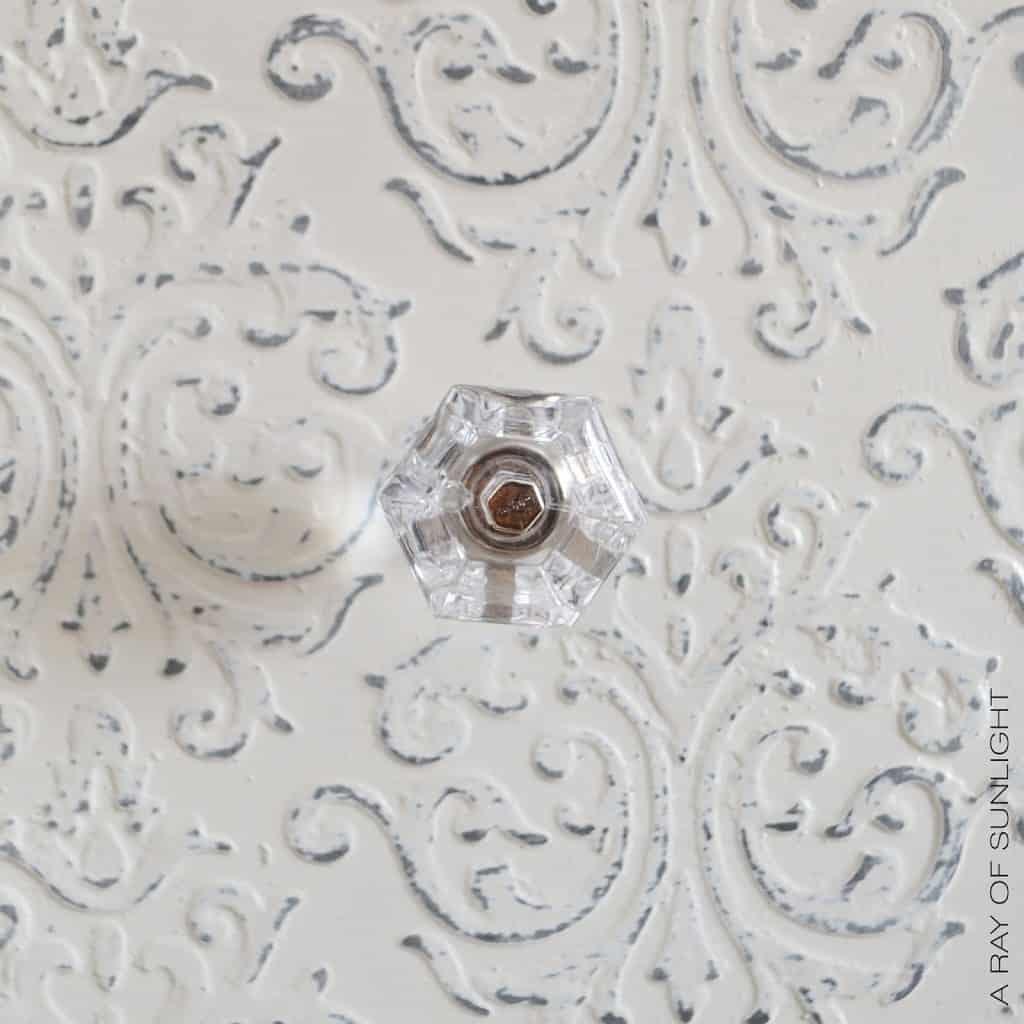 Once the primer was dry, I painted on this amazing Country Chic grey called Sunday Tea.

After all of the paint dried, I went over everything with 220 grit sandpaper and distressed it all up like no one’s business. This is why I used Dark Roast with the Texture powder. Dark Roast is a really nice deep brown that will show up almost the color of wood. So when you go to distress the texture, it looks like wood underneath. Booya!

Of course I wiped all of the dust off the dresser and then I sprayed on multiple coats of Poly. This one is my absolute favorite poly. I haven’t seen it yellow overtime like I have seen the Minwax poly do in just a day.

Learn ALL of my tips and tricks on How to Spray Polyurethane here! 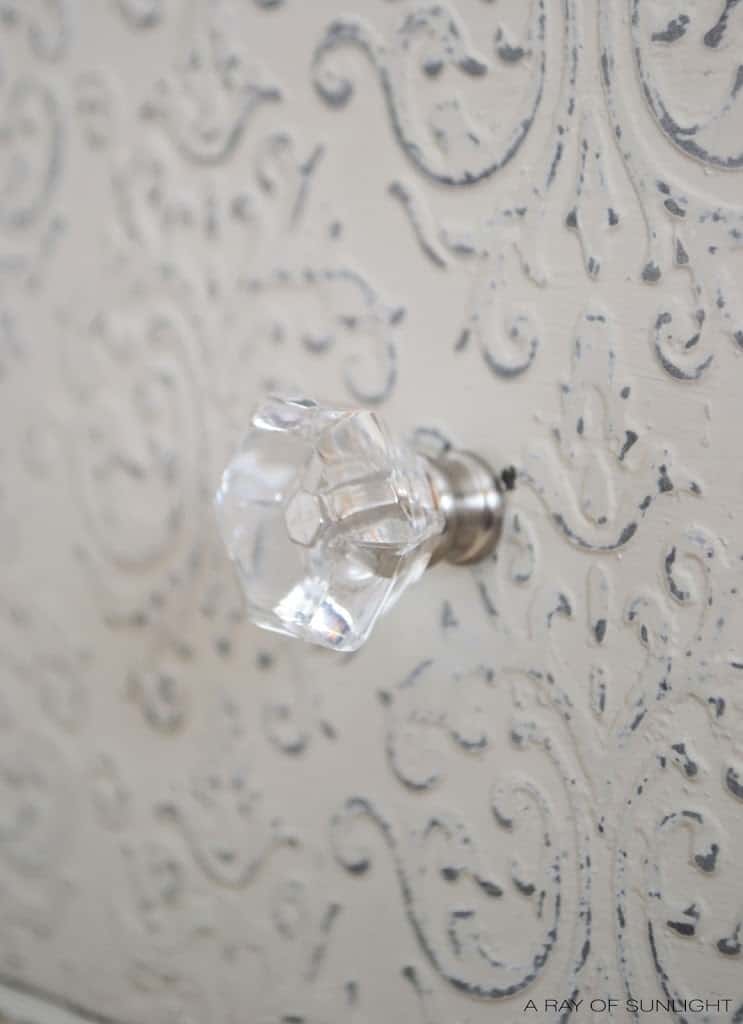 And then to finish it up, I added glass knobs so the texture could be the star of the show.

And that’s that! This little cutie is all finished up!

So now here’s the question.. would you add raised embossing to your dresser drawers? Let me know by commenting below! 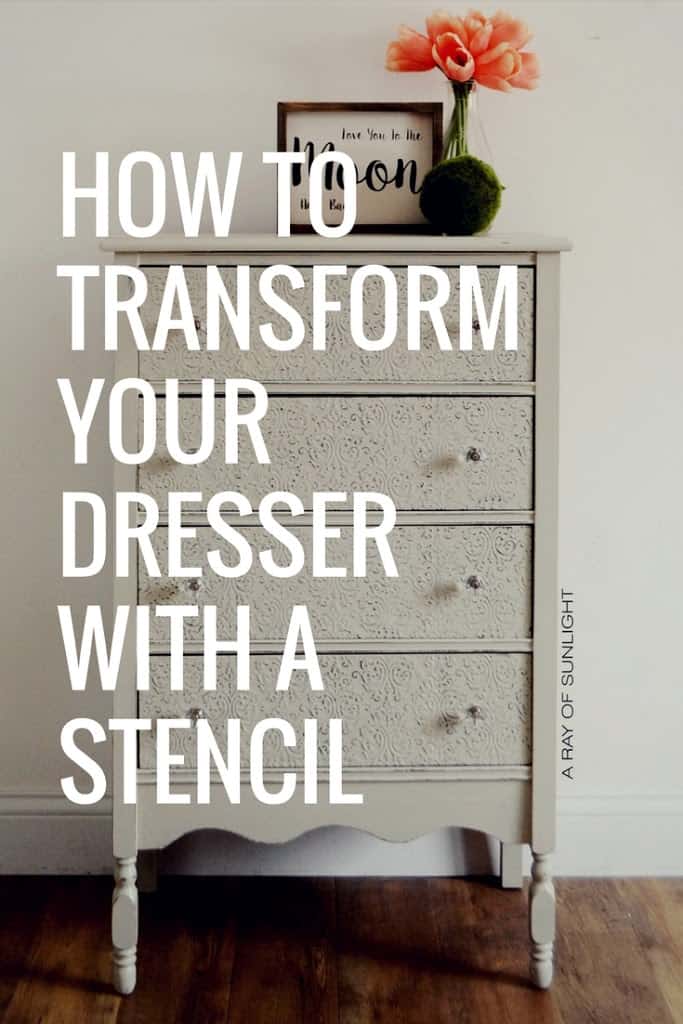 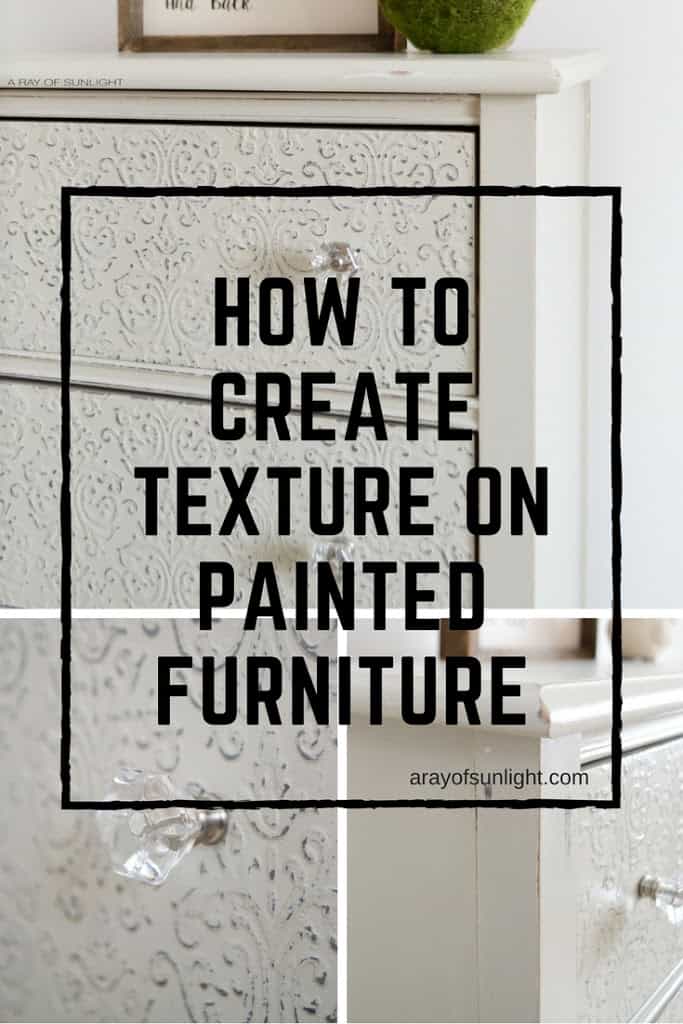 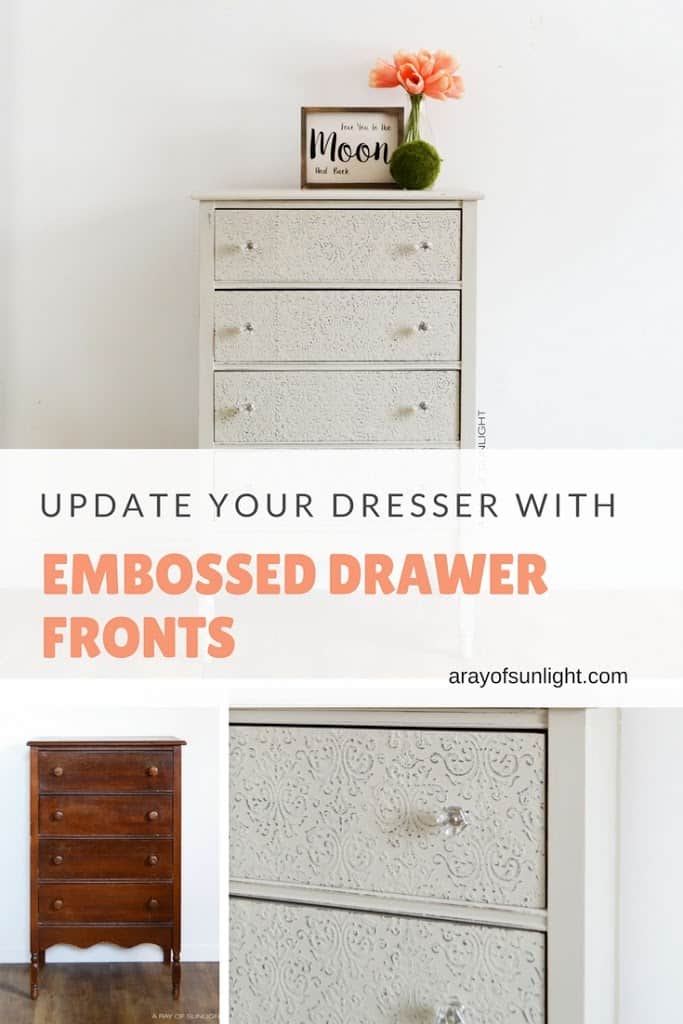 I love to see the transformation from old and outdated, to new and in style, and hope to inspire you through these makeovers! read more...

Hello! My name is Natalie. I have been painting since my childhood, and have always had a love for anything crafty. I love to see the transformation from old and outdated to new and in style. So I bring life back into old pieces and hope to inspire you to do the same. Read More…

CREATE AT YOUR OWN RISK!

All content on this blog was created for inspiration and entertainment purposes. Creating anything with the suggested tools, products or methods, is under your own risk!

I love when you share my work! Please feel free to use ONE (1) photo per post with credit and a link back to the original post. Additional photos or text may be available with my written permission. All images, tutorials and work are copyrighted.